Each year in August my alma mater, Grand Valley State University, holds a design conference at the Kennedy Hall of Engineering. It is a time where alumni from the university, current students, family and friends of students and just the general community can come check out the student’s projects. They consist of a mix of class projects and senior projects. The senior project section of study occurs the last 2 semesters of the program. The 1st semester is really to plan out the project by meeting with experts and  the customers and prototype some simple concepts. The 2nd semester is really build and debug and hopefully get sign off. Some are luckier with the last one than others! It was not uncommon to have a senior project take an extra month or two…. or 5….. although I hope 5 is rare, it has happened to people I know!
My senior project was to design and build a thermoforming machine to make gauges for the company that go in service vehicles, RVs, boats, ATVS, and pretty much anything but cars and trucks. Our project started out being form and punch with a budget of $25k. In the last few weeks of the 1st semester we realized that both were out of the $25k budget! Our sponsor saw what we proposed and reduced our requirements to just the forming machine. This in itself was difficult come to find out because trying to form an acceptable part took us to the last day in September before our sponsor gave us sign off. Making the equipment move and form was “easy” compared to trying to diagnose why are parts were slightly always out of spec.
GVSU Engineering 2012 – Thermoforming Project
Enough about me! These are the projects that I had the most time to talk with the teams and learn from them. It is by no means a “top dog” list. Full list here:
1) Adient – Robotic Inspection
Team: Adam DeBoer, Jesse Hendriksma, Ethan Ruffing, Joseph Russell, Gunnar Savalox
This project featured 2 Fanuc robotic arms that are used in combination with a vision system to inspect the MIG welds on car seat-frames for weld defects, things such as burn through and missing welds. This process was previously done manually by people and it can help them with through-put. 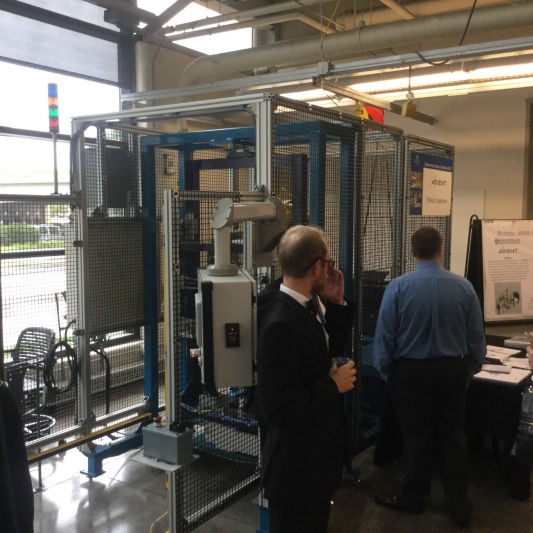 2) Cascade Engineering – Valet Trash Cart
Team: Jacob Miller, Matthew Smeenk, Travis Stillson, Kyle VanderStelt, Benjamin VanderWall, Brian Westerhof
The Cascade team had the task of taking a company’s product/service and improving it. The company was having complaints about the previous version of the cart and in some cases even lost contracts based on that! The cart is used to transport residential trash bags from places like apartments, condos, and retirement communities in Florida. The previous cart was loud, heavy, leaked and was not very ergonomic. They also increased the carrying capacity of the cart by integrating a system similar to how you would grab plastic bags from a grocery store checkout! This team had to put themselves in the shoes of those using the old cart and “trash” the old design! 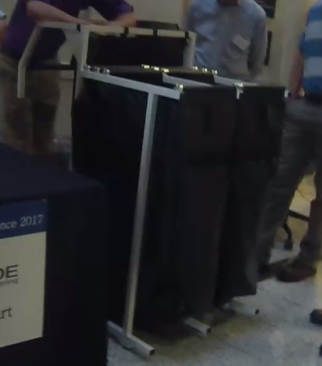 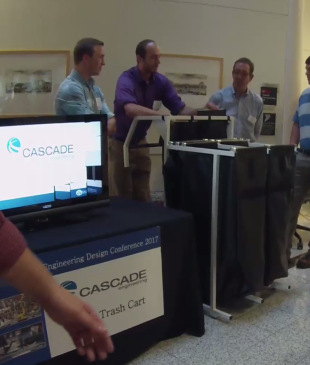 3) City of Grand Haven – Musical Fountain
Team: Brett Burton, Alexandria Graff, Luke Hubbard, Brett Johnson, Jordan Tatchin
The musical fountain in Grand Haven has always been an icon of West Michigan. this project team was tasked with developing and implementing new features for the aging fountain infrastructure. The water patterns haven’t changed much since the creation of the fountain. The current nozzles shoot water straight up at various heights with very little sweeping actions. One cool feature that I saw was the addition of a double helix sweep (you can see this in the video below).

YouTube video: CLICK HERE TO SEE THE STUDENT’S VIDEO
4) CWC (A Textron Company) – Mold Vacuum Flow Improvement
Team: Christian Bialek, Joseph Carroll, Ashley Garrett, Thaddeus Tjapkes
This project wasn’t the “flashiest” project but it stood out to me with regard to my interests. They were asked to reduce the number of scrapped parts due to inclusions of loose sand during the casting process. Walking by someone would have seen their videos and been like “oh cool, they made a vacuum.” What they did was take a complicated issue, run simulations using software called Star CCM to verify that the problems being experienced were actually what was going on. To verify the simulations they checked various locations inside the vacuum hood with flow meters and compared these numbers to what the simulations said should be the flow rate. From here they designed a streamlined hood and had MUCH better air flow!
The left shows the CFD of the old vacuum hood and the right image shows the re-designed.

5) GVSU Formula Racing Team – Formula SAE (a freakin’ race car)
Team: Abby Merritt, Gerrett Pelowski, Daniel Penninga, Andrew Stafford, Trevor Thomas, Joel Wessely
So if there was an award for luckiest students, it would go to these ones! Their project was to design and manufacture a Formula SAE race car! It had to fit within the guidelines of the SAE rules while also being a substantial improvement to the previous year’s car. The students were to use simulations to design a better frame and suspension while reducing the size of the car (lower vehicle weight). The students were able to re-use many of the previous car such as drivetrain, and engine components.